Fire breaks out at Prime Supermarket in Compassvale 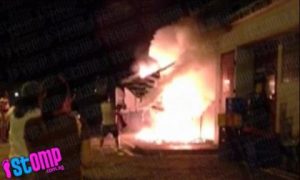 A fire broke out at Prime Supermarket in Compassvale on Aug 24 at around 12.40am.

Ms Aiza had filmed a video of the incident while she was shopping there, and recounted how a man helped put out the fire.

“I was in Prime Supermarket, buying some stuff at the cashier counter when a Filipino couple screamed that there was a fire behind the building. We quickly ran there and yeah there was.

NO HASSLE. NO WORRIES.

Here at WCT, we’re always responsive and ready to serve!

We are always on 24/7-Standby with operation-ready maintenance services for kitchen exhaust ventilation systems. Exclusively just for you; our valued clients.

For Your Peace of Mind – From Design, Build, to Maintain, we ensure every single design and installation is compliant with Singapore BizSafe Standards’ regulations.

Having our own brands of products, you know there is only one stop for all your queries. We cover all problems that arise with components and spare parts, like electric motors, both MV fans and parts, and control panels in hoods.

Because we take our work very seriously, we make sure that we are involved from A to Z. No third parties are involved from the designing, to the manufacturing, to production and to setup. So you can be assured all our services are by trained professionals.

We understand each customer will have different need and requirement. That is why all our systems are specialized and customizable to suit your needs.